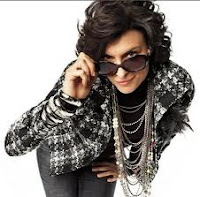 I think I'm having a crisis of age.  I don't know where I fit in or who I am anymore.

See - I've always been a very hip, stylish, just a touch of bad ass kind of woman.  Think - lady on the Chico's commercial (see picture above).  Well...I may not have been all those things but I thought I was so that's how I carried myself and it worked for me.

Lots of black in my wardrobe.  Very classic styling so I didn't look too trendy or too boring.  Just a pop of color here and there.  High heels (not really stillettos but high all the same).  Cool earrings.  Short, perky hair that was always a really cool color.  Jeans and t-shirts on the weekends.  Classic.  Easy.  Hip.

This weekend I spent a lot of time with "younger" people.  The teenagers aren't really a factor but their parents!  How come they look so young to me?  I was only 35 when my twins were born...they can't have been that much younger when their kids were born can they?

It's the extra weight and my inability to lose it that has really done me in and made me feel old.  I used to be a fitness fool.  I worked out everyday (at home).  Cardio (otherwise know as Aerobics and Step Aerobics).  Strength training.  I walked.  I did yoga.  I had energy to spare.  And while I have NEVER had what one would consider a hard body, it was a lot better than the one I have now.

My drinking and menopause put a stop to my workouts and as the extra weight piled on it became harder and harder to exercise.  My knees and feet just can't take it anymore.  I can't afford a gym or a personal trainer and really, I don't need one.  I have the knowledge and the know how to be a personal trainer.

I just don't have the motivation.  I have no energy.  I find excuse after excuse NOT to do it.  Just watch...

Note:  These excuses represent a mere sample.  I have many, many more.

Add to those excuses the fact that I went through menopause early. I didn't have a hard time...actually I hardly noticed it at all.  Of course I was heavily medicated with anti-depressants and alchohol at the time so that might explain it.  And I was actually excited when it was over!  No more periods...woo-hoo!

So I'm sitting in the auditorium on Sunday, waiting for the play to start and my girlfriend starts telling me about this warrior run she's doing in May.  My first thought was, "Oh that sounds fun!  I want to do that!"  Followed quickly by, "Shit.  I'm in no shape to do that and I really, really do not have the energy."  Subsequently followed by, "I hate myself."  and "I really suck at this 50 decade thing."

I do not want to suck at this 50 thing.  I sucked ass at the 40 thing and I do not want a repeat of that decade only with a slower metabolism, 50 extra pounds and no energy.

On the other side of me is my 60 year old friend who has enough energy for 3 of me and is sporting a new pair of skinny jeans.  She's such a trip.  And she can pull it off!  She's also signed up for speed dating but is bummed because they won't let her into the group with the 45 year olds.  I just love her.  I want to be like her when I get to that 60 thing.

Then there's one of the mom's.  She looks like I felt at 35...but with a smaller waist, bigger boobs and more self confidence.  All of a sudden I was feeling even more frumpy than usual.  Not good...not good at all.  I have never seen the woman before and we haven't so much as exchanged a glance but I hate her.  Not as much as mornings and menopause but I still hate her.  I know...I'm going to hell when I die for being so petty but right now I don't care.

So I need to figure out a way to get my hip back before I need one replaced.  I need to get back in shape...a shape other than round.  I also need the hell out of a new attitude.  And I definitely have to stop whining!!!

Because I hate whiners more that menopause, mornings and the bitch at school COMBINED!